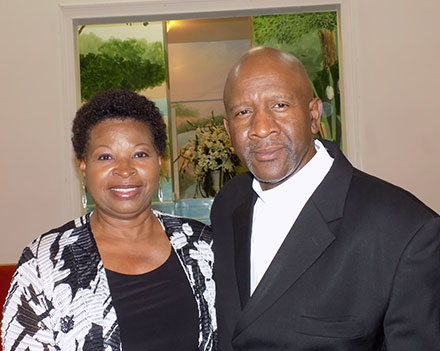 Pastor of Greater Mt. Canaan Missionary Baptist Church
Victor R. Thomas is the son of Audrie Thomas and the late Walter H. Thomas.
He was born in Jacksonville Florida. He has two sisters and one brother who preceded him in death January 2005.

He is married to the former Rosa M. Jordan and they have four Children: Monique, Alexander, Asiah and Ashton better known as “Bam.”

He graduated from Paxon Senior High School in Jacksonville, Florida In 1980.

He studied at Tuskegee University (formerly Tuskegee Institution during the fall of 1980 and then he transferred to Bethune-Cookman University (formerly Bethune- Cookman College) where he was awarded a full football scholarship. He received many honors at Bethune-Cookman University which included Honor Roll, National Dean’s List and All Athletic Academic Team. He is a member of the prestigious fraternity, Alpha Phi Alpha. During January 1985, just four months before he was awarded the degree of Religion and Philosophy in 1985, he lost his father to a battle with cancer.

After receiving his undergraduate degree in 1985, he enrolled in seminary at the interdenominational Theological Center (Morehouse School of Religion) in Atlanta, GA. He was on the National Dean’s List while attending ITC. In 1986, he was ordained at Mt. Ephraim Baptist Church in Atlanta, GA by Dr. R. L. White. He received his Masters of Divinity Degree with a concentration in Christian Education in 1988.

While in Atlanta, GA, he served as Assistant to the Pastor and Youth Minister at the Lilly Hill Baptist Church in Decatur, GA. He also did an internship in order to be a Clinical Chaplain at the Emory Affiliated Hospital in Atlanta, GA. He interned at Henrietta Eggleston Pediatric Hospital, Emory Hospital and Crawford Long Hospital.

After receiving his certificate as a Clinical Chaplain, he moved to Clemson, South Carolina and was the Pastor of New Hope Baptist Church for four and one half years. While in Clemson, SC, he coached football and basketball and started teaching in the Anderson and Pickens County School Systems.

In 1994, having a thirst to continue his educational journey, he enrolled in Erskine Theological Seminary in Due West, South Carolina to pursue a Doctor of Ministry Degree. While attending Erskine, he maintained his honor status and at the end of this journey, he wrote his dissertation on the positive impact church volunteers have on inmates. He entitled his project dissertation: “Bridging the Gap Between Inmates and Church Volunteers”. Rev. Thomas was crowned with the honor of receiving his Doctor of Ministry Degree in 1997.

In May of 1996, Dr. Thomas was led by the Holy Spirit to shepherd the flock of Greater Mt Canaan Missionary Baptist Church. It is evident, that he is guided by the Holy Spirit because the flock is willing to follow his leadership into the visions that God had planted in his spirit. He believes in educating with the Word of God through his “3 point” sermons. These points seem to be the trademark of his preaching style. He constantly encourages regular attendance of Bible Study, Sunday School and other educational classes so that his members will be prepared and able to stand during life’s challenges.