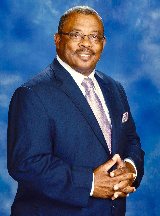 Rev. Michael Wayne Baldwin was born in a small town located in  to Mr. and Mrs. Willie James Baldwin Sr.; he is one of five children.  He was educated in the Effingham County School System where he excelled and graduated with honors.  With the desire to further his education, he attended , located in , where he received his Bachelor of Arts in Business Administration and an Associate Degree in Economics.

Rev. Baldwin began his biblical studies at  and completed his Masters of Divinity at Luther Rice Seminary in December 2003. He was later honored with a Doctorate of Divinity Degree in July 2007 from the Baptist International Bible Institute. In April 2007, Rev. Baldwin was inducted into the Morehouse College Ministers Hall of Fame, and in 2014 he received his Doctorate of Divinity from Open Bible Theological Seminary.  Rev. Baldwin is currently serving as President of the New Era Missionary Baptist Convention.

Rev. Baldwin accepted his calling and was licensed to preach the Gospel of Jesus Christ in October 1993 at the First Baptist Church of Stewardship in  He was ordained in March 1995 at the , located in  where he also served as Pastor from August 1995 until June 1998. In June 1998, Rev. Baldwin was called by the Lord to Pastor Christians for ; A friendly church with a friendly pastor, where “everybody is somebody, but Christ is all.” Under Rev. Baldwin’s leadership, an additional morning service was added, membership has increased tremendously, and more ministries have been developed to serve the needs of the congregation and community.

Rev. Baldwin is married to Sister Kenya Lynn Baldwin a dedicated mate and prayer warrior, for Reverend Baldwin and his ministry.  They are the proud parents of four lovely children, Nicoli, Natlye, Michael II, and Joshua, and son-in-law, Maurice. They are the blessed grandparents of granddaughter Maurissa and grandsons Christian and Riyen.

Rev. Baldwin has the gift to bless others through his singing. With this anointed gift, he’s had the esteem pleasure to sing with gospel greats such as the late James Cleveland, the late James Moore, Pastor Al Green, and most recent, Pastor John P. Kee.

Rev. Michael Wayne Baldwin is a man dedicated to serving God by serving God’s people. His greatest desire is that through his preaching, teaching, and singing, many men, women and children will be compelled to turn from their wicked ways and allow God to be Lord of their life.