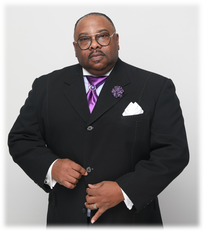 Gilbert Lamard Allen affectionately known as “Mardy”, is the son of two loving parents, Bishop Gilbert Lee Allen and Ruth B. Allen.  Pastor Allen was born on January 30, 1965. He was reared at his late grandfather’s church P.C.J.C. (Pentecostal Church of Jesus Christ) until his father was led by the Lord to leave and assist the late Elder Percy Pitts of the Apostolic Church of God in Christ Jesus. His father became Pastor after the Lord called Elder Pitts home.  It was at Apostolic Church where Pastor Allen was baptized and filled with the Holy Ghost at the age of seven. During Pastor Allen’s teen years, he became a member of Greater Grace Temple under the leadership and influence of the late Bishop David L. Ellis.  There is where he met and married his wife Carla.  They are the proud parents of two beautiful and anointed children, Mardy Jr. and Maria Allen.  After several years, God led Pastor Allen back to his father’s church where he accepted his call to the Ministry.  Five years later, Bishop Allen was led by the Lord to make his son the Assistant Pastor of now Greater Apostolic Church. Upon being released by his father, Pastor Allen helped Bishop Carmel Long for several months.  He was called back to assist his father until God called him to Pastor. This is where he founded New Life in Christ Ministries, along with his wife. After Pastoring New Life In Christ Ministries for twelve years and receiving the prophetic word, Pastor Allen heard the voice of the Lord clearly to merge with Greater Apostolic Church. After much prayer with his wife and the unanimous decision from both church board members, they decided to bring this union into fruition. The two churches on a Sunday morning on June 9th, 2013 combined as one. One Church, One Goal, More Souls. To God Be The Glory!!!!

Pastor Allen has completed several bible study courses and has also attended Aenon Bible School.  He has been trained in conflict resolution and counseling.  Pastor Allen is licensed in the P.A.W. (Pentecostal Assemblies of the World) and J.C.A.C. (Jesus Christ Apostolic Church) where he served as the State Evangelist. He is also licensed with the Higher Ground International Ministries.

Pastor Allen’s ultimate goal is to be used by God to be a blessing and care for His people.